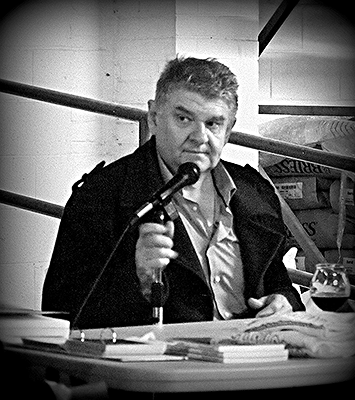 OK – forget everything you think you know about British beer styles. Or beer styles in general for that matter. After an informative evening with beer historian Ron Pattinson, I discovered that style guidelines, as defined by groups like the BJCP, don’t always account for the sometimes drastic way beer has changed over the years.
Pattinson, who writes the beer blog Shut up About Barclay Perkins, gave a talk last week to my local homebrew club about mild beer. Specifically, how it has changed over the past 150 years. His remarks were illustrated by liquid examples – historical beer recipes re-created from archival brewing blogs.
As Pattinson explained, mild wasn’t always a term used to describe a specific style of beer, certainly not the low ABV, amber to dark ale as described by the BJCP. “Mild” used to simply refer to beers that were meant to be consumed fresh. These beers didn’t need copious amounts of hops to act as a preservative, so they were generally less hoppy than their “stock ale” counterparts.
Even the terms “beer” and “ale” held different meanings than they do today. Go back far enough, and “ale” simply referred to malt liquor flavored with herbs and spices, while “beer” referred to malt liquor brewed with hops. When looking back in time, the names we give to beer styles aren’t always very consistent.
To illustrate the point, the first beer we sampled that evening was closer to what we think of as an IPA than a mild. Just have a look at these specs:

This “mild” beer is brewed with almost a pound of hops per five gallons! I found it remarkably smooth for an 8.2% ABV, 120 IBU beer — likely a result of the 1.025 final gravity. It featured a spicy hop flavor, but the main difference between this beer and an IPA was the lack of hardly any hop aroma. Apparently very few British brewers from this time period added hops with less then 30 minutes to go in the boil. And according to Pattinson, this beer wasn’t even considered particularly strong at the time, when even the weakest mild had an original gravity of at least 1.070.
The next sample starts to show a trend towards lower gravities. Due to changes in the way beer was taxed and the legalization of brewing with sugars, we begin to see invert sugar as a common brewing ingredient. And due to the robust brewing economy in Great Britain, hops were at such a shortage that they had to import them from the US. Still, this recipe seems more like a conventional pale ale than a mild:

In the early half of the 20th century things start taking a drastic turn. Two world wars make barley hard to come by. Gravities and alcohol contents continue to drop year over year and never return to their prewar levels. By this time, sugar is a common ingredient, particularly dark invert sugar syrups and caramel, which in addition to being inexpensive also contribute color and flavor to beer. Pattinson hypothesizes that as gravities declined, brewers made beers darker to essentially fool people into thinking they were stronger.
This mild from 1950 is entirely different from the first two beers we sampled, and much closer to what we consider a mild today. But still a very enjoyable session beer!

This lecture was very eye opening, and it challenged many previous notions about beer styles. Maybe we should spend less time categorizing beer and more time simply enjoying it!
Special thanks to Ron for visiting around brew club in Asheville! Be sure to check out his new book, the Home Brewer’s Guide to Vintage Beer, which contains many detailed recipes from over 150 years of brewing records.
—–
David Ackley is a writer, brewer, and craft beer marketing consultant. He holds a General Certificate in Brewing from the Institute of Brewing and Distilling and is founder of the Local Beer Blog.