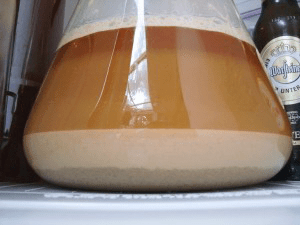 While it’s possible to pitch wort directly onto an old yeast cake, a better method of reusing yeast is called yeast rinsing. It’s a simple technique that can help make the most of your raw ingredients and keep your yeast cost down. And if you ever decide to take your homebrewing hobby to the pro level, rinsing your beer yeast will become part of your fermentation and yeast handling routine.

What is yeast rinsing?

Yeast rinsing is a method of taking a yeast slurry from a fermenting beer and separating the healthy, viable yeast from the dead yeast cells and trub. It’s always best to pitch as pure a yeast culture as possible, and rinsing removes much of the other particulate from the yeast slurry. This yeast can then be reused in another batch of beer. It’s best to reuse yeast from a low to moderate gravity beer after fermentation has started to slow. Yeast used in a high-gravity beer is more likely to be stressed and to produce off-flavors.

That’s it! Now you can try rinsing your own beer yeast. Then you’ll be able to reuse it in a new batch of beer! I recommend using a yeast pitch calculator to estimate how much of the yeast slurry to use in your next batch.

Have you ever tried rinsing beer yeast? Why or why not?
—–
David Ackley is a writer, brewer, and craft beer marketing consultant. He holds a General Certificate in Brewing from the Institute of Brewing and Distilling and is founder of the Local Beer Blog.