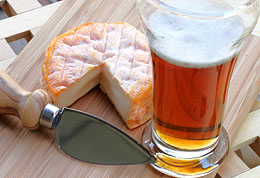 So much of the appreciation of beer comes from its relationship with food. Among the many gastronomical combinations, few offer such a perfect marriage as the pairing of beer and cheese.
Beer and cheese actually have a lot in common. Both are crafted by skilled artisans, utilizing mysterious processes to transform raw materials into something greater than the sum of its parts. In both cases, the creativity of the brewer and the cheesemaker can result in a unique and delicious product.
As with homebrewing, don’t let anyone tell that there is one right or wrong way to do a pairing of beer and cheese. Let your tastes and personal preferences guide you as you seek to match them. That said, here are some pointers:

A pairing of beer and cheese that is exceptional can bring about what I like to call food nirvana. Try some of these combinations to see if you can find the perfect match:

Want to go the extra mile? Pair a homemade beer with cheese made with beer. Now we’re talking! Do you have any tips for pairing beer and cheese? We’d love to hear yours!
——————————————————————————————————–
David Ackley is a beer writer, brewer, and self-described “craft beer crusader.” He holds a General Certificate in Brewing from the Institute of Brewing and Distilling and is founder of the Local Beer Blog.