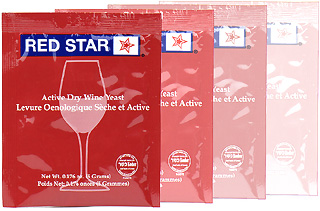 I was going over Friday’s post, and it came to mind that the information in that post about a little yeast creating a lot of sediment actually relates to one of our wine making tips. Even though it is hard to put too much yeast in a batch of wine, the opposite holds true as well:
Regardless if you’re making 1 gallon or 5 gallons of wine, only 1 packet of wine yeast is needed.
What this is saying is if you have a 1 gallon wine recipe that you are following, and it calls for 1 packet of wine yeast for that gallon of wine, and you want to make 3 gallons, multiply all the ingredients by 3 except for the yeast. One packet will be plenty regardless if you are making 1 or 3 gallons.
The only time you will need to add more than a single packet is if the batch is more than six gallons. For every 6 gallons you will need an additional packet of wine yeast. As an example, if you are making 20 gallons of wine you will need to add four packets of yeast.
Another way to look at this is to think of the yeast as a starting culture not as an amount to be related to a recipe. As long as you are adding enough to sustain the culture in the batch, you are adding plenty.
———————————————————————————————————
Ed Kraus is a 3rd generation home brewer/winemaker and has been an owner of E. C. Kraus since 1999. He has been helping individuals make better wine and beer for over 25 years.

0 thoughts on “One Packet Of Wine Yeast Is All It Takes!”