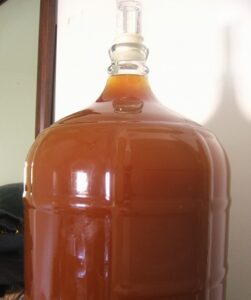 After attending a mead-making workshop and listening to some tips from the pros, I’ve decided it’s time to make my first mead! Since it’s my first go-round, I’m keeping it simple: honey, water, yeast, and yeast nutrient. If the flavor needs adjusting later on, I can easily do that during secondary fermentation, but for now, I’d like to start with the basics of making mead.
Preparing the mead couldn’t have been easier. I actually mixed it together while making a batch of homebrew, so it took essentially zero extra time out of my day. While the malted grains for my beer were steeping, I mixed the honey and the water for the mead in a fermenting bucket. Since this is my first try, I’m just doing a one-gallon batch.

Since there is no boiling or mashing in making mead, mixing the ingredients together was a cinch:

*Note: Rehydrating the yeast is simply placing the yeast in a small amount of pre-boiled water at about 100˚F. Just practice good sanitation and follow the directions on the packet.

All in all, the mixing of the mead probably took about 30 minutes tops, including rehydrating the yeast and cleaning/sanitation. Per Michael Fairbrother’s recommendation, I set the fermenting bucket in my new fermentation chamber at 62˚F. 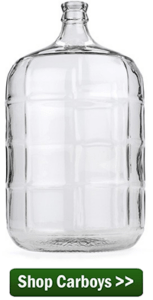 Staggered Nutrient Additions
You probably noted that the yeast nutrient in the recipe was divided into four parts. Many mead makers suggest adding yeast nutrient gradually during the fermentation process. I followed Michael Fairbrother’s recommendation again, adding a quarter teaspoon of the yeast nutrient during the initial mixing step, then a quarter teaspoon each at 24 hours, 48 hours, and 72 hours into fermentation. Pretty easy. Once again, sanitation is really important any time you open the fermenter. Sanitize the stirring spoon, the teaspoon, and anything else that may come in contact with the mead when adding the staggered yeast nutrient additions.

So that’s it! I’m planning to leave the mead alone at 62˚F for about three months before transferring it to a one-gallon jug. I’ll taste the mead at that point to decide whether to add any tannin, acid blend, or any other flavorings to enhance the mead.

Have you ever made mead? How did it turn out?
———————————————————————-
David Ackley is a beer writer, brewer, and self-described “craft beer crusader.” He holds a General Certificate in Brewing from the Institute of Brewing and Distilling and is founder and editor of the Local Beer Blog.

0 thoughts on “My First Mead”