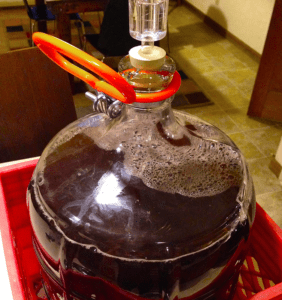 I’m so excited! I FINALLY get to make wine again after a seemingly un-endless hiatus due to major life events and changes.
Once my husband and I moved into our new home, I made sure one of the first rooms I set up was the “winery” in the finished basement. It’s still a work in progress, and it’s kind of pathetic when I look at how many pieces of equipment and winemaking supplies I actually have. It’s slim-pickin’s over here. I think eventually I’ll be able to remedy that with the help of E C Kraus!
So, I ordered a couple of different winemaking kits, as I am hoping to be able to run a couple of wines at once. I also purchased a Copper Tun heating pad, as I noticed it’s relatively cool down here in the basement and there isn’t really any good system to keep the heat down here at the moment. In retrospect, I really should have purchased two heating pads if I want to run two wines at the same time, since it is a little too cold for most yeasts to function properly. I’ll have to put that high on my list of winemaking equipment to purchase in the near future.
I purchased both a white and a red wine, and since it’s been a while since I’ve had a chance to actually make wine, I decided to start with the white, since there are fewer steps and it’s theoretically easier than the red. The white I’ll be working on for the next several weeks is the Gewurztraminer from California Connoisseur.
Before I did anything, I read up on the water in the new city I live in, and turns out, like most municipalities, our water is chlorinated at some point during its treatment process. So, I poured off what I needed in a clean bucket and left it overnight to allow any residue chlorine to blow off. 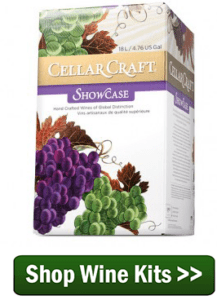 The next day, after making sure I got all the moving dust off my equipment, I set up with my sterilizing solution (sodium bisulfite) and got to cleaning! I should note: I am using a brand new primary fermenter, so I will admit I didn’t sterilize it longer than I probably would have it had been used previously.
I added the water and bentonite to the Gewurztraminer wine base per the instructions. The temperature of the mixture was a little low (64oF.) so I turned on the heating pad and brought it up to 68oF. before measuring the specific gravity and adding the yeast.
The specific gravity ended up being 1.112 (1.113 after adjusting for calibration temperature of the hydrometer) prior to adding the yeast.
Finally, I added the yeast and crossed my fingers! Now I wait until Day 8 to see how things are progressing!
————————————————————