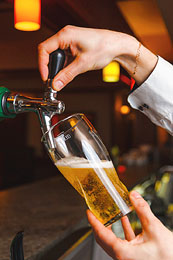 Once you’ve started brewing at home and made your first batch of home brew, you’re going to have to find something to store it in. The two main options are either kegging beer or bottling beer. Many people initially dismiss kegging their own beer, because the concept of having a keg in their house seems a bit much. But just like anything else that goes with making your own brew, bottling or kegging is largely a matter of personal preference.
Kegging does bring its own benefits.
While the equipment needed to keg beer might seem like a lot at first, with the kegs and valves tanks and taps, it’s really not when you consider how much equipment you need to bottle beer. The actual beer bottles are what most home brewers find the most trouble coming up with, either because they simply don’t have any lying around, or because they’ve lost some to damage along the way.
When you use kegs however, no matter when you’re ready to brew and store your beer, you’ll have one on hand. Even if it’s just a matter of emptying the small amount left in it and giving it a quick clean, typically there’s not nearly the running around when you’re kegging as there is when you’re bottling.
Another way kegging your beer can save you time is the simple fact that the entire process is much shorter. You’ll be filling one large container rather than dozens of small ones. Imagine half a day of bottling cut down to half an hour of kegging, and you can see how much more convenient it can be.
Bottling and kegging your own home brew both come with their own benefits, and these are a few that come with kegging your own (aside from the fact that it’s just cool to pull a draft for your friends!) But if kegging your own beer has always seemed like something that was simply too overwhelming, consider the benefits it can bring before you write it off altogether.