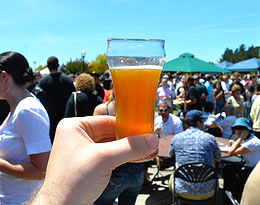 Homebrew festivals are quickly becoming a popular way to share the art of homebrewing with others. There are several possible formats. Some festivals just ask brewers to donate the beer, while others require a small fee to participate. Some homebrew festivals raise money for good causes, and many include a competition where the winning brewers can earn prizes, exposure, or even the opportunity to brew their winning beer with a professional.
But the thrill of the festivals themselves are usually motivation enough for me to participate. Here are five of the reasons why I take part in homebrewing festivals every chance I get:

Yes, you’ll probably give away a fair amount of beer at a homebrew festival, but isn’t sharing your creation what it’s all about? Trust me, there’s nothing quite like passing your homebrew across the table to an eager beer fan, watching their face light up as they sip your brew, and answering them when they ask, “You made that yourself??”
Not sure how to find a homebrew festival in your area? It’s easy. Just go to Google and type in “homebrew festival” (in the quotes, followed by your nearest city, or maybe even your state. Example: “homebrew festival” kansas city
Have you ever participated in a homebrew festival? How did it go?
——————————————————————————————————-
David Ackley is a beer writer, brewer, and self-described “craft beer crusader.” He holds a General Certificate in Brewing from the Institute of Brewing and Distilling and is founder of the Local Beer Blog.