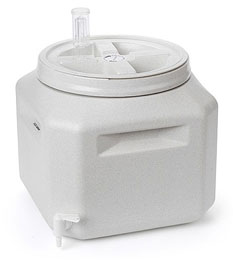 I have purchased 2 of your 9 gallon Tuff-Tanks and planned to use as both the primary and secondary fermenters. I read your article re: vinegar issues and you indicated air exposure can be an issue. Is using the 9 gallon tuff tank an issue for secondary fermentation? I find the tuff tanks an easy apparatus to use for transferring and racking as gravity flow works well and sediment separation is manageable. Should I use a carboy vs the tuff tank?
Name: Al
State: Maine
Hello Al,
Thanks for the great question. There always seems to be some confusion surrounding primary fermenters, secondary fermenters and head-space, so it’s great to have this opportunity to clear it up a little.
The important thing to understand is that air-exposure can only become an issue after the fermentation has stopped. During the fermentation there is plenty of CO2 gas coming off the liquid to keep the wine must protected from any foreign, airborne contaminants and to keep the air from getting to the wine and breathing life into the few bacterial cells that may be in it already.
The CO2 gas coming off the fermentation is heavier than air. This means that if the Tuff-Tank is left undisturbed, the CO2 gas will have to be force out with more gas. It will not simply float away on its own. This is an important point. This means that as long as you leave the lid and air-lock on the Tuff-Tank, there is no way for air to get into its head-space. This is true for any primary fermenter. There is nothing but CO2 gas in the head-space. It is only after the fermentation has ceased and you take the lid or air-lock off, that the air-exposure will actually have an opportunity to begin.
Typically, having air in with the wine for a few days is not going to matter that much. And the fact that you should be adding sulfites to the wine at this point, such as Campden tablets or sodium metabisulfite, also helps to protect the wine from any type of spoilage. The the sulfite gas will form a protective layer in the fermenter as well. So there is no great urgency in any of this, however once you take the lid off the fermenter and determine that the fermentation is complete you will want to make plans to get the wine clear and bottle it. If you can not get it bottled in a matter of days, then you should consider putting the wine in a carboy or something similar that will not allow for head-space until you do have time.
I hope this clears if up some. In short, as long as you have CO2 gas from the fermentation in your Tuff-Tanks there is nothing to be concerned about. It is only after you the fermentation has completed and you have taken the lid or air-lock that you have to take some form of action: either bottling the wine in a few days or move the wine to a carboy or similar.
Happy Winemaking,
Ed Kraus
———————————————————————————————————
Ed Kraus is a 3rd generation home brewer/winemaker and has been an owner of E. C. Kraus since 1999. He has been helping individuals make better wine and beer for over 25 years.