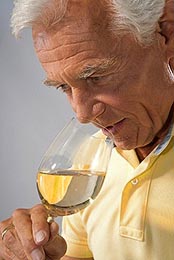 Ed, I have made approximately 15 batches of wine from wine kits (mainly California Connoisseur, but also Cheeky Monkey, and KenRidge Showcase). The majority has been Sauvignon Blanc.
Only 2 batches turned out well. One in particular was outstanding. Both were CA Conn. For all of the others, I have had to struggle to drink the wine, and have thrown the majority out. I have no idea why the 2 turned out well and why the others didn’t. I am encouraged by many to give it up, so I want to reach out to you for a solution before further considering that unfortunate option.
Here is the outcome. Firstly, the white wine is a bit dark in color, but I can live with that, although it may help to diagnose the real problem, which I think is acidity. The balance is awful!
I have tried using my city water. I used my pool testing equipment and believe the PH is approx. 8.2, way too high.
I have used bottled Sparkletts purified water and the PH is approx. 6.8, a little low. I later discovered that this may be the same as reverse osmosis, which I know you do not recommend, even though the wine maker recommends it.
In both cases the Specific Gravity gets down to approx. 0.94, so it appears that the yeast is healthy and doing its job. But in both cases, the acidity, taste, and balance is terrible.
Here are some additional facts:
1. I clean and sterilize everything.
2. The fermentation temp is 68-74.
3. I follow the kit instructions.
Do you have any solutions? My only other thought is to mix the city water and purified water to get the PH closer to 7.0. but if this is the problem and such a sensitive issue, I would think that many wine makers would share this experience and there would be warnings on all of the kits advising people to make SURE that the starting PH is neutral. Would it help if I sent you a bottle to test and taste to diagnose the problem?
Many thanks in advance. Regards
Name: Mike M.
State: AZ
—–
Hello Mike,
So sorry to hear that you are experiencing such results with so many wines. I would love to get to the bottom of this to see what is going on. The results are unusual in the sense that most customers rarely have a batch they don’t like, much less, dump down the drain, so I fear there may be some fundamental issues at the core of all of this.
While there are certain situations where water can be the problem, this is highly unlikely to be the case. Not only because of the pH’s you have mentioned, but also because of the fact that have used two different sources of water with the same results. Most of the time when water is the problem it is because of some extreme issue, such as the water coming from a private well and such. As you mentioned, if the pH’s you used were problematic there would be much more noise on the internet and elsewhere about it. That’s just not the case.
I do not know if there is any truth behind what I’m going to say, but I have a gut-feeling as to what is going on. What I’m about to say is all based on what I’ve seen before while helping thousands of other home winemakers, so I’m going to go out on a limb a little bit.
I believe that your wines are becoming contaminated with a bacteria.
There are two reason why I think this:

Both oxidation and bacteria growth fit together nicely into the information you have described above.
Having said all of this, I do not believe this is going on because you are not clean or do not use sanitary measures. It is more likely that some piece of equipment you are using has a nook or cranny, or hidden place where the bacteria is hiding between uses. This is evident by the fact the you are have such consistently bad results. The bacteria could be hiding behind a backing-nut of a fermentation faucet, or a piece of hose you have been using that hasn’t been getting completely sanitized all the way through.
I have also seen situations where pickling or vinegar making has been made near the wine making area. The bacteria used to make vinegar is called acetobacter. It can go airborne and land on different surfaces, including walls and ceilings, only later to fall directly into the wine.
Once some of the bacteria gets into the wine, the oxygen combined with the available nutrients provide the perfect storm of bacterial growth.
If your wines are experiencing a vinegar contamination, you will notice an off-odor in the wine. It may not be that strong, but will have a whaff of nail polish or paint thinner. If it is a bacterial contamination other than vinegar — a more wild bacteria — it could have odors ranging from barnyard, to sour milk, to sauerkraut. There are many, many different kinds of wild bacteria.
What I would do before starting another batch is to take all your wine making equipment completely apart and sanitize it with something like Cleanpro SDH or Basic A. Take all the faucets off the fermenters. Take the rubber stoppers off the air-locks.
If you are making your wine in a basement with exposed floor joists and such, I would spray it down with a bleach solution consisting of 1/4 cup of bleach to 1 gallon of water. Just one light spray is sufficient.
When making your next wine, reduce the air exposure — particularly after the fermentation has completed. When bulk storing the wine, keep the head-space to a minimum. When racking the wine, don’t splash it around. Fill the container from the bottom up, with the hose all the way down to the bottom of the container.
Mike, I hope this helps you out. Just realize that there is something fundamentally wrong that probably has a simple solution. It’s just a matter of identifying what’s happening and correct it.
If you do not smell any off-odors or smell something different than what was described above, please let us know, so that we can hone in on the root cause.
Best Wishes,
Ed Kraus
———————————————————————————————————
Ed Kraus is a 3rd generation home brewer/winemaker and has been an owner of E. C. Kraus since 1999. He has been helping individuals make better wine and beer for over 25 years.